The Houla Massacre in Syria Is Just the Beginning

March 7, 2011. Nouri, Ali, and I were in Benghazi, watching television for news of the Libyan civil war we would soon be fighting in. It had been a long day – we recovered Ali’s Toyota Hilux pickup truck that was damaged in the Rajma military base bombing, made some quick repairs, and got it back on the road as our combat vehicle.
It was my first day in the revolution; I had been in Libya for less than 24 hours.

The town of Bin Jawad had just fallen to Gaddafi’s forces that day and Ali shared with us the disturbing news he had heard.

Fifty rebels had been captured in Bin Jawad.  They weren’t taken to prison. They weren’t even given the mercy of a bullet in the head.

They were burned alive. 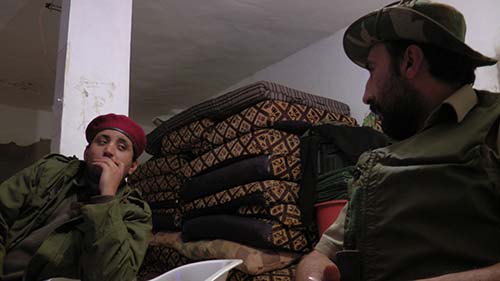 Photo from my conversation with Ali and Nouri Fonas about the capture of Bin Jawad on March 7, 2011. I was captured with Ali and two other rebels in Brega on March 13, 2011. Ali was missing for nearly a year until his body was found in a mass grave months after the war ended.

News of a massacre in Bin Jawad did not deter us. Rather, it increased our resolve to fight, and to get to the front line as soon as possible and do whatever we could to stop Gaddafi’s advance towards Benghazi.

And it will be the same with the rebels in Syria. For every person in Houla who had their homes destroyed by artillery, for every rebel fighter who stood his ground and was killed by Assad’s army, for every woman and child who had their throats cut by the Alawite shabiha militias that swarmed the town after the shelling had stopped – a dozen, maybe a hundred, maybe a thousand Syrians will join the ranks of the Free Syrian Army and fight to the death to avenge them.

This is just the beginning

The Houla massacre is emblematic of the savagery that is rapidly defining the Syrian civil war and it provides a disturbing insight into where this war is headed.

The following is certain:

1. Revenge will be taken by the people of Houla against nearby Alawite villages where the shabiha militias came from.

2. These Alawite villages will be razed, just as the Libyan town of Tawergha was razed by militias from Misrata for supporting Gaddafi during the war and because some Tawerghan men participated in the assault on Misrata and allegedly in the rape of Misratan women.

3.  When Assad falls there will hardly be an Alawite left in Syria. Many will flee and most of those who remain will be killed.  The majority of Syrian Christians, a group that supports the regime out of fear of what might replace it, will follow them into Turkey and Lebanon.

4. Revenge killings by the various sects will continue long after the regime falls.

5. The sectarian conflict in Syria will exacerbate sectarian divisions in neighboring Lebanon, igniting violence that could escalate into small-scale civil war in various parts of that country as well.

The Free Syrian Army (FSA) has made an effort to control its forces and minimize sectarian strife and atrocities committed by the rebel forces, but without a centralized command structure, organization, and a way to hold individuals accountable for their actions there isn’t much they can really do to keep a cycle of revenge from spiraling out of control in the coming months.

Syria has already surpassed Libya in terms of brutality, violations of human rights, and unapologetic savagery. It is devolving into an African-style genocidal civil war reminiscent of Rwanda and the best we can realistically hope for at this point is a Lebanese-style civil war (which lasted 15 years and resulted in hundreds of thousands of casualties).

Neither of these are good scenarios, but one of them is going to happen.  Whether it is the worst case or the least-worst case scenario will depend on how soon the West intervenes. Inaction will lead to more massacres and Houla will just be one of many, alphabetized under “H” along with Hama and Homs on a “Syria massacres” Wikipedia page.

The Assad regime must be thoroughly destroyed, dismantled, and overthrown with no remnant of it remaining. NATO did a tremendous job assisting us in Libya, ending the war more quickly with far fewer lives lost than would otherwise have been possible.  It is likely I would still be a prisoner of war today (or still fighting Gaddafi if I had been traded or released) if it weren’t for NATO intervention in Libya.  The unequivocal defeat of Gaddafi’s forces through NATO airpower combined with our rebel forces on the ground has allowed Libya to progress with relative stability and no signs of a counter-insurgency against the new government.

It is time for NATO to act, with or without UN approval. Houla should be a catalyst for action, not because of the massacre itself, but because of what the aftermath will be if such massacres are allowed to continue.  The massacre in Houla, the shelling of Homs, and the current assault on Hama have already begun a chain reaction of revenge killings that will continue even after Assad is overthrown.  By the time the violence stops, Syria will be an almost entirely Sunni country with very few Alawites or Christians left standing.

And once that happens, they’ll turn on each other.

Note: I have not found any published reports of rebels being burned alive in Bin Jawad and have thus been unable to confirm whether what Ali heard really did happen. However, Associated Press reported on March 7, 2011 that 50 rebels were captured in Bin Jawad – that part of the story is confirmed – it is only whether they were burned alive or not that is in question. During the war there were many stories coming from the front lines, not all of which were accurate. Please contact me if you have any evidence or details about this incident.